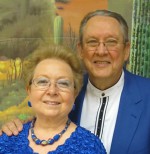 Chuck & Sandi Weiss, formerly of Howell, Michigan and now living in the beautiful Las Palmas Grand community in Mesa, Arizona, have been dancing for over 45 years and teaching for 40. They have choreographed many dances (cue sheets available on this web site), several of which have been selected as rounds of the month in various states as well as Round of the Quarter for ROUNDALAB. They have cued and taught at twenty two National Conventions and have served on staff at English Mountain, McCloud, WASCA, Circle 8, Lolo and Fontana Accent on Rounds.  They have been involved in several weekends throughout the year including organizing and serving as round dance leaders at two square and round dance events in the Midwest, the Pumpkin Promenade, in Toledo, Ohio and the Spring Frolic in Sarnia, Ontario. They organized and hosted an annual Chili Pepper Weekend, in Hartland, Michigan with Barbara and Wayne Blackford in the month of August and are currently sharing the duties of a new weekend featuring Clinics and Workshops in April of each year. They have been featured leaders at such festivals as Forest City in London, Ontario, the Rose City Festival in Windsor, Ontario, the Promenade Jamboree in Toledo, Ohio, the Rochester, New York Square and Round Dance Spring Festival and the Minnesota and New Mexico State festivals as well as two years on staff at the WASCA convention in the DC area and one year at Fontana. Most recently they have been featured leaders at the annual RivCo Square and Round Dance Festival in Indio, California. Other recent events include Oregon’s Midwinter Festival in January of 2013 and the Mid-Summer Roundup in Sisters, Oregon in August of 2012 and again in 2019. Just recently they were the featured leaders for the New Mexico State Square and Round Dance Festival. Information for many other activities can be found on the flyer page and the Calendar page.

They are current members of ROUNDALAB, served as Chairman for two years, served on the Executive Committee for 5½, as chairs of the Standardization and Planning Committee and on the ROQ Committee for Phases IV and V. They belong to ICBDA, and are honorary members of MRDTA where they served as President, Vice-president, Treasurer, Festival Chair and Festival Program Chair. They have taught and continue to teach all phases of round dancing from Beginners through Phase V.

In October of the last twelve years, they have participated in the St George, Ut Huntsman World Senior Games in the medal activity of Square Dancing. Each of the twelve years they have won medals and now hold silver, bronze or gold medals in each category; Mainstream, Plus and Advanced.

In their previous lives, Chuck was the supervisor of one of Michigan’s largest and greatest State Parks where he was deeply involved in working with the statewide computerized reservation system and other computer related duties and Sandi taught Kindergarten through 3rd grades in the local school system. They have one son who has been the general manager of four exclusive restaurants in Jackson, Wyoming and  recently relocated to Solvang, California still in the restaurant business.  They share their home with their new 9 year old Shih Tsu, Brandy. Hobbies involve computing, choreography and reading for Chuck and card making and many other crafts for Sandi.

They currently are in their twenty first year of teaching and cueing in the Mesa, Arizona area offering a full dance instruction program through Phase V. They also cue for four different square dance events each week and frequently on Saturdays and Sundays for special dances.

Your form message has been successfully sent.

You have entered the following data:

Email Roy@RoysWoodenWonders.com, ﻿the Webmaster, if you're experiencing any problems with this website